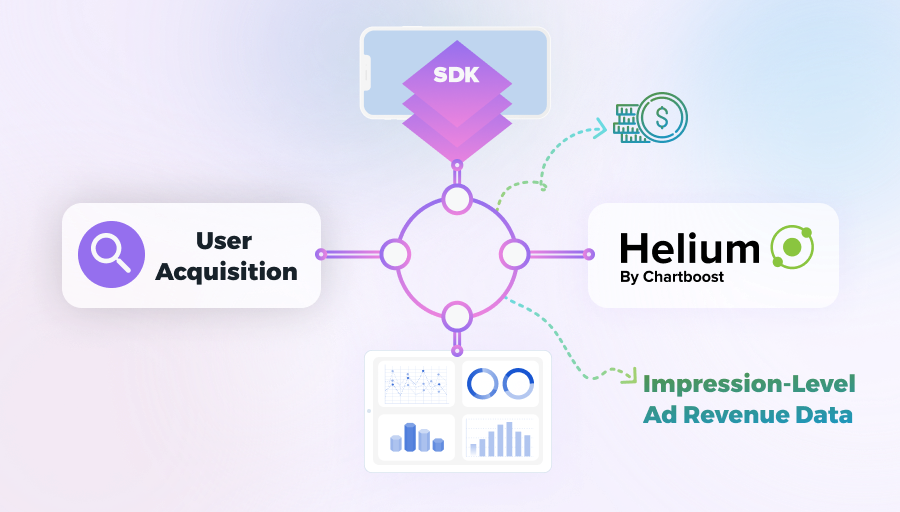 What new features are available on Helium SDK 2.6.0?

Last year, Chartboost introduced the concept of a flywheel connecting user acquisition (UA) and monetization. With a functioning flywheel, developers have more data from both sides, make better decisions, and build a healthier mobile business growth loop. So how do we achieve it?In the past year, Helium picked up momentum due to the rise of in-app bidding, which has been more widely adopted among mobile app developers as the prominent ad monetization strategy, providing publishers with great monetization opportunities and benefits over the traditional mediation waterfall monetization stack. In-app bidding lays a good foundation for publisher monetization.

Helium SDK 2.6.0 marks a milestone with the rollout of our impression-level ad revenue data (ILRD) feature, which gives publishers access to ad revenue data for all ad units across any ad network in real-time. Publishers can feed the data to their internal business intelligence (BI) system or send it to third-party attribution platforms (Appsflyer is already supported, and Adjust integration is in Beta) to associate ad revenue with individual users.

Having granular insight into users' real lifetime value (LTV) helps publishers, especially publishers who focus on in-app advertising for monetization, to better hone their user acquisition (UA) channels. With a complete LTV picture, marketers are able to acquire the right users across the right channels at the right install price. These acquired users, in turn, generate more ad revenue in the application and help better find the next users to come into the app thus, the cycle loops and the "flywheel" works.The second feature in Helium SDK 2.6.0 is the rewarded server callbacks. For developers who have rewarded video as a monetization ad format, when a user completes the ad view, the Helium SDK sends a signed VERIFIER_HASH along with rewarded payload to the publisher's server. Publishers get the view completion order, verify the hash and dispatch in-game currency to the user.Sending reward orders directly from Helium SDK instead of Helium server to the publisher server can reduce the latency to dispatch rewards and offer users a better experience.

What new features are available on Helium SDK 2.7.0?

To ensure the latest support for Android operating systems, Helium now supports Android 12 and 12L beta (APIs 31 and 32). This includes compliance with the latest advertising ID requirements.Helium banner ads now enable better handling for offscreen banner ads that will be shown later. Refresh enhancements give publishers the ability to pre-cache banner ads and display the ad at the correct timing in the app.

Ready to get started?

Integrate the latest Helium SDK today! For new publishers, we're opening Helium to a wider audience than ever just take a minute to sign up!